Gina Raphael: “My Entire Focus is the State of Israel”

Upon finishing her second year of college as an art history major at Wellesley, owner of Los Angeles’ Mickey Fine Pharmacy & Grill chain Gina Raphael embarked on her first journey to Israel. She immediately “fell in love” with the country and returned for a semester in her third year, followed by another voyage after graduate school for the entire summer. Gina returned several times with the hope of making aliyah, but while faced with a lack of available work opportunities, she focused on establishing her livelihood stateside. However, after an 18-year gap, Gina vowed to return to Israel annually and has been doing so for the last seven years. She takes great pride in her family and work, but outside of the two, she states, “My entire focus is the State of Israel.”

Presently the chair of Israel Bonds Los Angeles, Gina initially became involved with the Bonds organization in 1992, when she was asked to host Israel’s first athlete to win an Olympic medal, Yael Arad, who took home silver in judo in that year’s Summer Olympics. Having an extensive history in activism for Israel and advocacy of the Bonds mission, Gina and her husband Jeff were eager to travel with Israel Bonds’ International Delegation to celebrate the festivities surrounding Israel’s 70th anniversary. She exclaims, “The Israel Bonds delegation is truly unique. No other organization brings you as close to the heart of the Israeli government and business as Israel Bonds. Israel Bonds brings that to you.”

When Gina now sees the impact that Israel has had on her life resulting from her frequent trips, she and her husband make it a point to educate their children about Israel and Judaism. She affirms, “I count the days between trips and am hoping to travel to Israel twice this year on different projects. Our youngest, Mia, who is nine, joined us on the delegation; this was her seventh trip to Israel. When you have a nine-year-old who can have a dialogue with Israel’s Ambassador to the UN, or Israel’s Minister of Science, Technology and Space, and discuss issues facing the country, you know you have done your job! Our 18-year-old just finished her eighth trip to Israel, and our oldest, who has also traveled to Israel many times spent last summer in Israel working for the iconic fashion house, Maskit. Israel is our priority.” 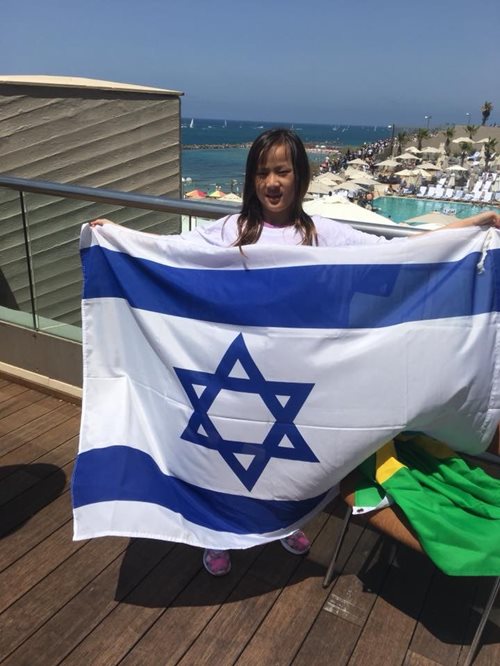 In 2015, Gina helped to launch the Israel Bonds Los Angeles Business & Professions Division, in which she and her husband served as chairpersons at the Division’s inaugural event. In the same year, they were both presented the prestigious Golda Meir award at the annual Israel Bonds Golda Meir Luncheon for their commitment and dedication to the Jewish homeland. Gina serves as a prominent role model within the Jewish community of Los Angeles, working closely with the Consul General of Israel and The City of Beverly Hills on special projects, including Israel’s 70th Birthday Celebration in the City of Beverly Hills.  She takes an active approach in empowering women through her involvement in Israel Bonds’ Women’s Division and attests, “I share with people that an investment in Israel bonds is an investment in Israel.”

Upon returning from the excitement of an unforgettable week marking Israel’s 70th anniversary, Gina is in awe of what she has witnessed while in Israel during its Independence Day. She remarks, “The work that Israel has done to make the desert bloom, and then sharing this innovation with the world, is the true essence of the start-up nation.”