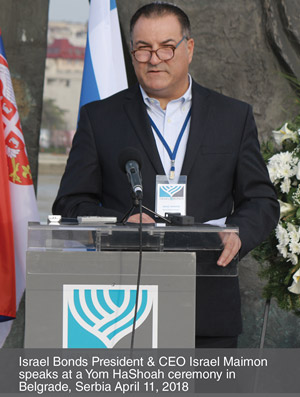 (On April 11, Israel Bonds President & CEO Israel Maimon, together with Bonds leaders from Brazil, Panama and Mexico, spoke at a Yom HaShoah ceremony in Belgrade adjacent to the Sajmiste concentration camp to honor the thousands of Serbian Jews who lost their lives in the Holocaust. Following are his remarks.)

On Yom HaShoah, we join as one in expressing shared grief over the greatest tragedy ever to befall the Jewish people.

Every Serbian Jew that was murdered – and there were thousands – had a personal story now lost to history. They were husbands and wives, brothers and sisters, friends and relatives.

In 1941, there were some 16,000 Serbian Jews. Three years later, less than 2,000 remained. A Gestapo official bragged, "Serbien ist Judenfrei” – Serbia is free of Jews – highlighting the destructive goal of the Nazis.

What happened to the survivors? Some undoubtedly went to Israel to live, for the first time, as Jews free of persecution. Others likely immigrated to the United States to begin life anew.

What binds survivors and victims alike is the fact that they experienced the most terrifying, unspeakable event in the annals of human history.

Never before had a specific group been singled out for mass extermination. The simple fact of being Jewish was a death sentence.

Exactly three years and one week after the surrender of Nazi Germany, the Jewish future changed forever, and our destiny shifted from destruction to redemption. That was the electric moment David Ben-Gurion proclaimed the establishment of the reborn State of Israel.

As they built and defended their nation with foresight and resolve, perceptions of the Jewish people changed as well.

Ben-Gurion highlighted this dynamic shift in his typically eloquent way: “Israel has created a new image of the Jew in the world - the image of a working and an intellectual people, of a people that can fight with heroism.”

This last word – “heroism” – has become the defining trait of the Israeli people. A proud Jewish nation and its powerful Israel Defense Forces – land, air and sea – are the ultimate guarantee that these two words - “Never Again” - will resonate not as a phrase, but as an unbreakable promise.

It was my honor to serve as an officer in the Golani Brigade. This afforded me not only the opportunity, but the privilege of playing a personal part in perpetuating that promise.

It is a promise that reached fullest expression in 2003, when Israel Air Force jets made a dramatic pass over Auschwitz.

The lead pilot, himself the son of Holocaust survivors, made this stirring declaration as fighter planes painted with the Magen David flew low over the death camp: “We pilots of the Israel Air Force, flying in the skies over the camp of horrors . . . promise to be the shield of the Jewish people and its nation, Israel.”

Later this month, we will celebrate the independence of this proud nation, a country now seventy years strong. Even with the passing of seven decades, the reality of Israel’s independence continues to inspire us every day.

Israel and the Jewish people overcame what others would deem impossible. The rebirth of the Jewish state following 2,000 years of exile; a nation unfailingly emerging victorious in the face of overwhelming odds; the ingathering of over 3 million exiles from nearly 100 countries; and today’s high-tech wonder – all this, and so much more, constitutes a true miracle.

As we stand together in sorrow, we remain resolute in our determination to continue the miracle. We do this in honor of the six million victims of the Shoah, who never had the chance to live in a world with a proud, dynamic Jewish state.

May their memory always be a blessing.

(View video from the ceremony here)