A Bond of equal partners

As I write this, I am sitting on a coach driving around Poland on March of the Living.

I’ve been able to sit and reflect on the last 3 ½ years, working with Israel Bonds. Looking out at the vast forests we are passing helps to put into perspective why it was so important for David Ben Gurion to turn to the supporters of the new fledgling State of Israel and secure the country’s future.

Ben Gurion recognised that for the Jewish People to have a home, to live in safety, they must have a state of their own.  And in order for it to be a secure refuge where Jews could build lives of dignity and prosperity, Israel would have to become economically successful.

In the aftermath of WW1 and WW2, many countries came into being.  But only Israel has managed to create and maintain a long-term, consistent and dependable diaspora bond program, an unbroken lineage of 68 years. 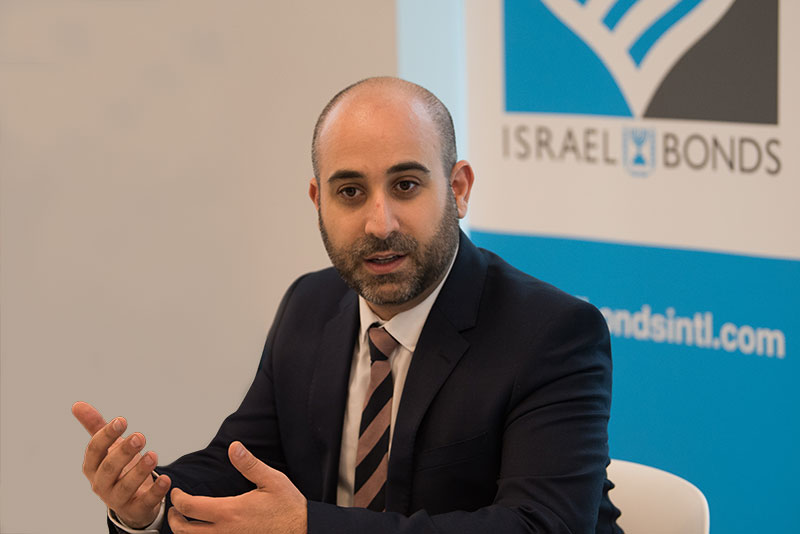 Today’s Israel is a success story.  A world-renowned innovator, Israel enjoys a thriving and resilient economy,
with a growing population:

So today, the call to action for Israel Bonds has morphed from ‘Israel needs your help’ to a more important ‘How can Israel help you?’

Over the past 71 years, the dynamic has shifted from bonding with the Diaspora out of existential necessity to a bond of equal partners, an enduring connection that is about more than a financial transaction alone.

I’ve had the privilege of working with Israel Bonds since early September 2015. At that time, we had a lot of work to do in order to get to the same exposure as our American and Canadian colleagues.  Perhaps one of our biggest challenges were and still are:

The answers are compelling.   Israel Bonds can be a platform for our clients to build up their business and social contacts and to network with audiences who share common interests in Europe, Latin America and North America.

Israel Bonds can be used for many different purposes – as diverse as providing a meaningful gift for life-cycle celebrations; placing ‘a piece of Israel’ in retirement plans; saving for tuition fees for children or grandchildren; or simply adding a product with a 68 year history (and counting) to one’s investment portfolio.

My message is simple: celebrate the State of Israel. Come to an Israel Bonds event. Buy an Israel Bond and invest in the Jewish State.

From the brink of destruction, we’ve had a hand in building a strong nation. Brick by brick and bond by bond.

Now, you can engage in the State of Israel as the State wants to engage with you!